Celebrate the achievements of your fundraising peers. What better excuse to do so but to raise a glass and recognize others with the fundraisers' toast.

In 2008, at an event honoring a colleague, I was asked to say a few words to mark the occasion. On a whim I raised my glass and offered up what I referred to as the “Fundraisers’ Toast.”

The goal of the Fundraisers’ Toast is simple… be deliberate about celebrating the achievements of professional peers. In essence, build relationships internally, not just externally. What better excuse to do so but to raise a glass and recognize others working hard to facilitate philanthropy.

When asked what I do for a living, I simply reply “I’m a fundraiser.” I’ve found it prompts further inquiry… to which I say, fundraising is not about asking for money. It is about building relationships with people who have a passion for helping others and engaging them to invest in changing lives through their own gifts of time, talent, and treasure.

Fundraisers spend a lot of time out of the office to build these relationships. This is good.

However, for long-term success, it is also important to spend time within the organization. As you build relationships with donors, remember to do the same with volunteers, interns, program managers, leadership, and your peers. This simple act will help you learn the mission of your organization and make living it effortless.

The original toast has been modified a lot over the years to serve different occasions. With each special event, the list of “jargon pairings” grew and grew. Eventually the toast became long and cumbersome. Last year I decided to consolidate the toast and write it down so I could share the Fundraisers’ Toast (pdf) with others. The timing was perfect as I would announce my departure from my then current employer a month later.

The Fundraisers’ Toast has served well for many years. From first major gifts and credentialing to promotions and new beginnings, the formula is always the same. Capture the group’s attention. Give some context—maybe an anecdote or story about the honoree. Raise your glass, and toast. Cheers! 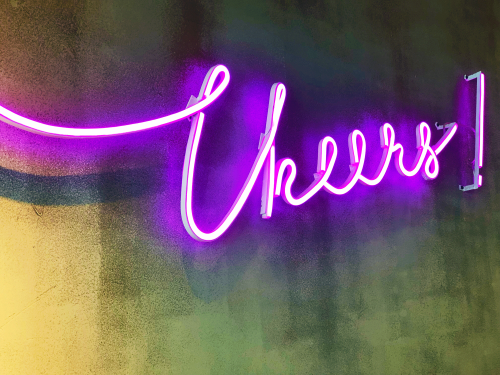 May your plans be strategic...
and your cases compelling.

May your donors be major...
and their gifts transformational.

But most of all…

May your passion be others...
and your heart philanthropic.

Because, philanthropy when thoughtful, is never regretful.

Here is an old article from the Wall Street Journal on How to Give Really Good Toasts that might prove helpful.